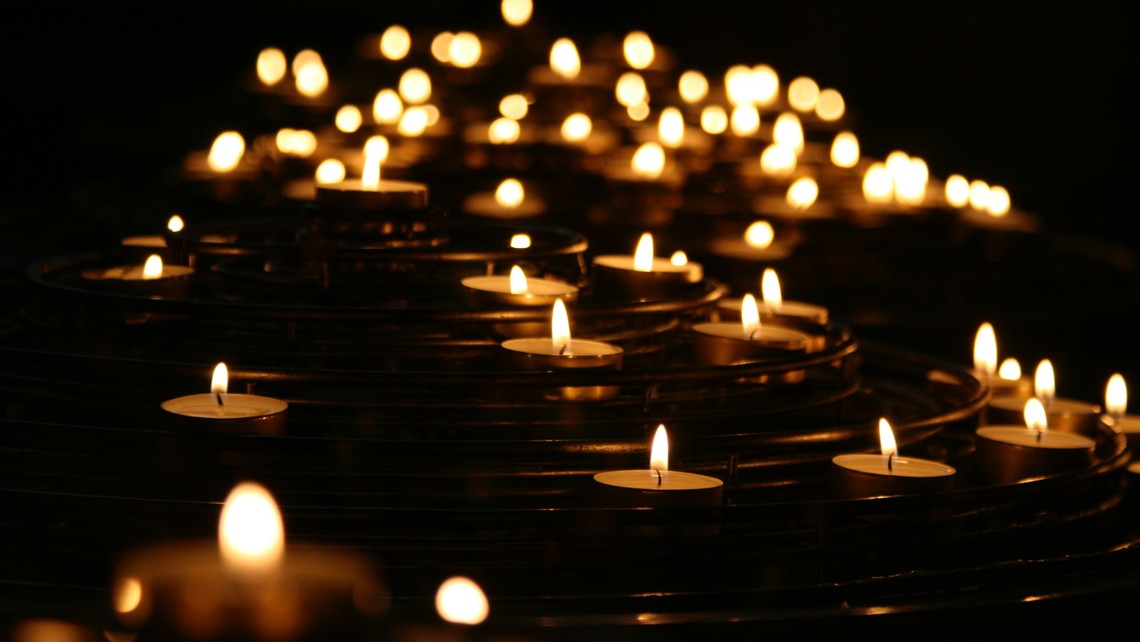 What possibly could be ‘happy’ about death?  The love of your life is about to leave this world and you’ll be totally alone.  I was soon to find out it was not about me.

In December 2014, my dear Fred came down with strep throat, which turned into impetigo, which like strep throat is a bacterial infection of the skin.  By May, his rash had ulcerated; it was stage four melanoma.  My husband went into home hospice.

In the three weeks leading up to his death, Br. Michael and Br. Joseph came to the house and chanted parts of the Divine Office, the seven penitential psalms and the Gradual Psalms, which brought us great comfort.  The death watch itself lasted 16 hours.  A local priest gave Fred the Last Rites and Viaticum in the Tridentine Rite, Fred also finally received Confirmation.  A total of four priests would come and pay their respects.  The brothers returned at that time and chanted the full day’s Office (the octave of Pentecost) in Fred’s room and said many other prayers for the dying.  In between prayers, my husband was very peacefully between two worlds, and several times became lucid and drank water.  He understood everything that was happening and recognized everyone present.  The priest who brought him the Last Rites said, “This is a very holy death.”  There were a lot of tears from myself and Fred, but it was peaceful at the same time.

Fred held on until the light of the morning sun started to enter through the window.  In those last seconds, it was just me and the hospice nurse with him.  Fred rallied briefly, opened his eyes and kissed the relic of the True Cross I offered him before he kissed me goodbye one last time and fell asleep in the Lord.  I could swear I now heard the angels chanting those psalms we had been hearing before.  It was an incredibly holy moment.  And then it was over.  My husband had a white glow about him and a smile on his face even in death.  Everyone noticed this.  The undertaker delayed embalming a couple days because he wasn’t completely sure Fred was dead!  His cancer rash on the neck also seemed to disappear.  Br. Michael commented the next morning, “Fred looks more alive now than when he was dying!”

The two hospice nurses who had taken shifts both agreed they had never seen anything like this before.  They said, “This is the type of death we pray for all our patients but never see —at home surrounded by loved ones, hymns and psalms and so courageous without fear, without struggle and so totally peaceful.”

It didn’t stop there.  Fred died at home and his wake was in our home too.  Thanks to the brothers the Office of the Dead from the Divine Office was chanted the night before and morning of the funeral.  The Mass was a Solemn High Tridentine Requiem with full choir.  They repeated this on the two anniversaries of his burial.

Folks tell me 70% of people pray for a death like this: at home, surrounded by friends without machines and doctors.  It should be a holy time.  I will be forever grateful to Br. Michael and the other brothers that helped me to discover that a truly holy death is indeed a ‘happy’ death.

Br. Michael’s counsel has been invaluable to our family. His brothers have visited us for a week-long retreat each year, and every visit... END_OF_DOCUMENT_TOKEN_TO_BE_REPLACED

Our family has known Br. Michael, Br. Joseph and many of their brothers for a long time. These are good men, loyal to... END_OF_DOCUMENT_TOKEN_TO_BE_REPLACED

SOW IN TEARS, REAP IN JOY

This was a time of a major crisis in my family. My husband had just abandoned me and my 18-year-old son after a... END_OF_DOCUMENT_TOKEN_TO_BE_REPLACED